I invited a business owner to come and talk to me about where he wanted to go with his business. I thought from what he told me about his concept that I might be able to help with his business vision and provide strategy that would get him the sales he wanted.

He accepted and he and his partners came — or most of them did.

Within a few minutes of starting our meeting, one of his partners began to get cell phone calls all of which he took. I consider that rude.

I deal only with small business owners. I know that calls can be critical and that owners feel they have to wear all the hats at first and do everything. I don’t mind if they need to take a short call or deal with an emergency.

However, if they are expecting an important call, then it would be courteous to let me know when we begin. I also think if the call is important enough to interrupt our meeting for some time, they should be courteous of my time and just reschedule. Things happen. I respect that. 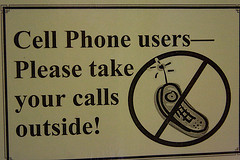 Maybe I need this in my conference room. Photo by Roland.

This prospect took one particular call and without saying “excuse me” or anything to me or his partners, he left the room. Actually, he left the office for about 10 minutes. No one knew what was happening. I think that was rude to me and the others.

I continued to talk to the other partners while we waited for him to return. When he came back, there were no apologies, no nothing to me or his partners. That’s rude.

You know you’re rude when your partners apologize for you after you leave. That’s what happened. The biggest apology came from the man who asked for the meeting originally. That took a lot of guts from him and I appreciate the courtesy.

I wish this company success but I only want to work with owners who treat partners and vendors with respect. Prospects need to have good manners, too.

Has this ever happened to you?

Get a partner or set up a strategic alliance — which is better for your business growth? Many business owners want a "partner" to  share the load. Partners exert a lot of control no matter how little … END_OF_DOCUMENT_TOKEN_TO_BE_REPLACED