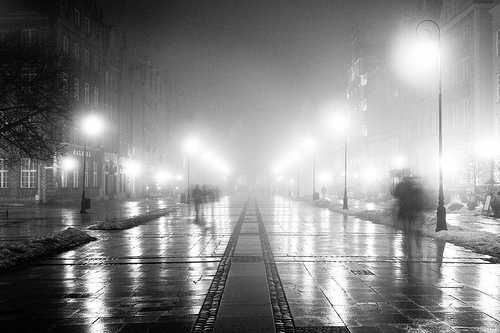 Photo by Adam Kusmierz from flickr.com

There are four of them; like the four horsemen of the apocalypse. They ride down on you. You can’t fight them so you need to be vigilant and get out of the way. They seem harmless or well meaning. But, beware!

You’ve heard the saying, “I’m from the government and I’m here to help.” And, they can and they do. They can also turn your world upside down if you find yourself in competition with them.

When Carole Keeton Strayhorn was Texas’ Comptroller she often talked about the “Yellow Pages Test”, that state government shouldn’t be providing goods and services that are available in the Yellow Pages, since businesses supposedly have those things covered. I truly think she tried to live by that.

Other government officials have tried but not succeeded, some haven’t even tried and they are really ghost competitors.

Austin Mayor Lee Leffingwell organized a small business summit. I wrote about it in a post entitled, 4 Concerns about the City of Austin’s March Small Business Summit. About forty of us attended. I think it was a good first step and the City is just finishing up a series of focus groups led by Morningside Research and Consulting, a professional, well run small business. We’ll see what happens.

I was part of the White House Conference of Small Business and Congressional Summit on Small Business almost 20 years ago.  After a week of deliberation, we voted on our recommendations and sent the top 60 to President Clinton. Some, including the Paperwork Reduction Act, were actually implemented. Most never were or will be. I think because the government chooses to “insource” (do it themselves).

This ghost, like the Government ghost, is not only hard to fight but a business that has them as a competitor is on the defensive, at war with themselves and their desire to support their community. Non-profits do good for others. “Do I really want to take clients and money away from them because they do such important, wonderful work?” for-profits ask. It is next to impossible to fight motherhood and apple pie. Non-profits are important, are special.

And, they are big, fat ghost competitors. I can always tell when the economy is in trouble. More of these ghosts appear and in guises that are not part of their mission but appear in a way they see will make the money they desperately need. That is not wrong. But, it is a competitor and must be viewed as such.

I have to admit that I think this can be unfair competition because of other advantages they have that for-profit businesses do not especially in terms of taxes, mailing privileges, and media access. There have been many articles written about this ghost competitor. In “Commercial Nonprofits, Untaxed Entrepreneurialism and “Unfair Competition”  Glenn M. Gomes and James M. Owens maintain that there is “neither a clear theory of unfair competition nor a precise generally accepted definition of the term”. On the public radio program “The Takeaway”, one person suggested we add a 28th amendment to the US Constitution that would take away the tax exempt status of religious organizations under the theory that they should help their share to the country that gives them the right to have religious freedom.

This ghost is very much alive and well and there are later articles as well on this subject, especially for the last two years. Just Google “unfair competition and non-profit” and see what you come up with. I like this earlier one because it does present both sides – a “pros and cons” ghost story, you might say.

There is even an organization, the Business Coalition for Fair Competition, that is a watchdog on this issue. To get a picture of what this ghost looks like, read James T. Bennett’s Unfair Competition: The Profits of Nonprofits. It was written in 1989 but it makes a fair case about the issues that keep coming up year after year.

One of the most notorious ghost stories involved computer retailers and universities. This ghost competitor was alleged to be selling computers at “student” prices to anyone, student or not. There was even federal testimony on this case. Another involved the YMCAs and fitness centers.

I was recently putting together an RFP (Request for Proposal) for a client. It would have been a large contract. I had to remind the owner that this client had been doing it themselves and could take a look at the bids of those who responded and decide to keep on keeping on. In the end, that’s what that prospect did. No contract was awarded.

This is a ghost that gets overlooked. Don’t make that mistake. It is hard to fight also. Partially it’s hard because Americans sometimes think we really can do it all for everyone, everywhere. Our optimism as DIYers can get us in trouble or we can use it to accomplish what seems impossible. Not much middle ground here for someone who really have a better answer.

DNAAs  (Do Nothing At All)

For my money, this is the one that is the saddest ghost competitor of all.  Everybody does this. Government agencies kill goods and services requests; businesses and non-profits “postpone” contracts, consumers just wander away never to be seen again.

Sometimes doing nothing is the right answer. Sometimes it is chosen for the wrong reasons: fear, a sense of being overwhelmed, too busy, too lazy, too something.

If you spot this ghost, RUN DO NOT WALK to the closest exit. You really can’t win this one and there are plenty of other “good fish in the sea” to quote Gilbert and Sullivan’s Mikado.

My advice: look again at your list of competitors. Make sure these four are included. Then, plan what you will do when you spot one. Just keep your running shoes handy.

I am collecting ghost stories. If you have one to add or advice or a comment, please send it to me at triplett@bscusa.com. I know I will be writing about this again, real soon, as we say in Texas

Before anyone buys anything, they have to complete their own buying continuum™ process. This is true whether they are from the government, a non-profit, a consumer, or another business. From your … END_OF_DOCUMENT_TOKEN_TO_BE_REPLACED