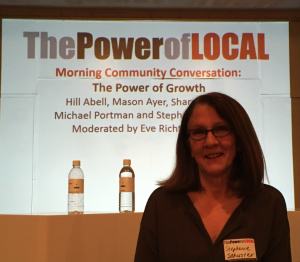 You can grow. You can do it in an organized way. Our speaker, Stephanie Schuster has done this several times. When it comes to growth it can go well or you can end up taking it all back. Come sit in on the brainstorming and make your own contribution to the discussion. This is a continuation of her great program for Austin Independent Business Alliance this spring.

About our speaker Stephanie Schuster

Stephanie Schuster, the mother of five and grandparent of six, never expected to be the owner of a bakery. She loves books, dogs and horses, and she still works retail shifts.

Austinites Valerie and Stephanie Schuster were raised by a good cook. Their Upper Crust Bakery has been one of Austin’s most successful outlets for more than 30 years.

Neither of the Schuster sisters attended college. They married young, started families, and then found their careers. According to Stephanie, a baker named Carl Davis taught Valerie how to make the laminated doughs necessary for croissants and Danishes. Davis helped Valerie develop much of the original product line and stayed with the company for several years. Stephanie invented the cinnamon that grew so popular that people came in to buy dozens. Though Stephanie always took care of the bookkeeping, she didn’t join the bakery full time until about three years into the deal. At some point, Stephanie took over running the bakery full time. Also in there was the creation of Rosedale, a gourmet to go shop. Sometimes growth doesn’t turn out as expected and Rosedale goodies were folded back into the bakery.

Be sure to arrive before 7pm when the doors lock. We can’t let you in.

Anthony Palomba didn’t know about the "Business Permission to Operate If Clauses” when he started but he does now. He started Thakgnosis, which means “to know peace” but he hasn’t found time for that … END_OF_DOCUMENT_TOKEN_TO_BE_REPLACED